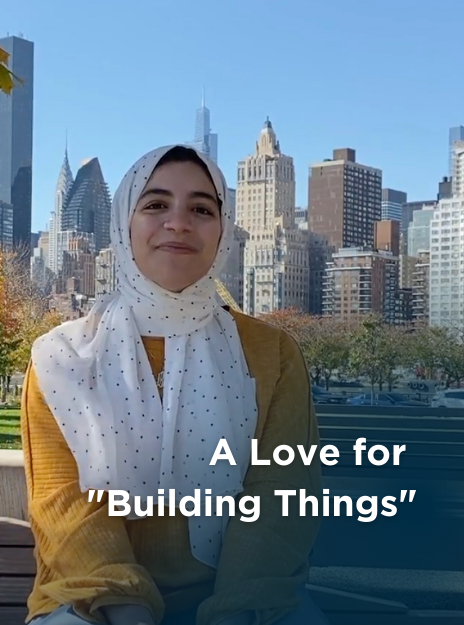 Mariam D.’s father works in construction. It’s he who she credits with fostering her love for “building things” — but it took Mariam a while to realize that she could build programs, abstract things, not just physical, concrete ones.

Mariam D.’s father works in construction. It’s he who she credits with fostering her love for “building things” — but it took Mariam a while to realize that she could build programs, abstract things, not just physical, concrete ones.

Before enrolling in Break Through Tech’s AI Program at Cornell Tech, Mariam had no formal introduction to machine learning. A student at the Stevens Institute of Technology, she had taken some classes on data structures and knew she wanted an opportunity to understand it at a deeper level. Machine Learning and Artificial Intelligence are difficult to find classes on for undergraduates, especially earlier in one’s career. But Mariam liked to explore, and jumped at the chance to learn more.

The oldest of 7 in an immigrant family, Mariam “grew up accustomed to having to be responsible for many things at a young age.” She relied on herself, she says, because her parents didn’t speak English and couldn’t help her when she struggled in school.

At Break Through Tech, Mariam could rely on others. In the AI Studio part of the program, students were grouped into small teams to tackle real-world problems — Mariam’s was hosted by JP Morgan Chase. She says AI Studio further cultivated her interest in data analytics by giving her a chance to test out her new skills, but it also made her realize how much she loves working in teams. The opportunity to collaborate and bond with other women in the program is consistently a highlight for Break Through Tech AI students.

“I learned that I should never be scared to ask questions,” Mariam says. “[Women] could be the change we want to see in the tech industry.”

When Mariam thinks of her future in tech, she’s still deciding between a corporate or a research path. “My hope is to be able to look back when I am older and realize that I have not only learned from others, but that I spread that knowledge forward in any way I can.” She’s already taken what she’s learned so far and taught computer science classes at the Boys and Girls Club of Hoboken.

So just like her father, Mariam likes to build things. And through Break Through Tech AI, she has more tools at her disposal. It’s all within her reach, and she won’t be doing it alone.