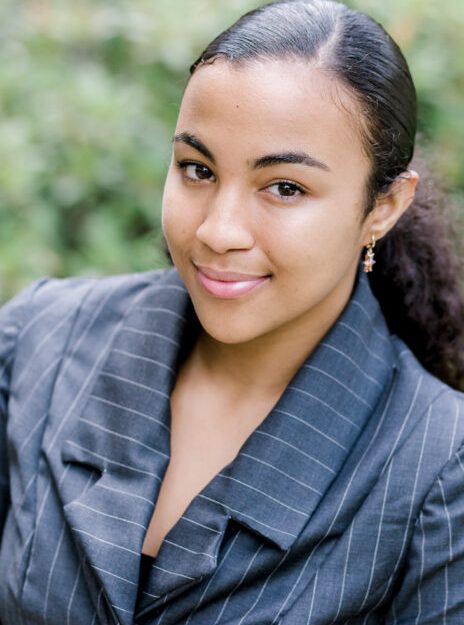 Chrystal Mingo “grew up in paradise,” relishing the tranquil blue beaches of Anguilla during her childhood. However, she had a dream for both herself and her sister of going to college, one that would eventually lead her away from the island. At the age of 13, her mother moved the family to New York City for the “future of her children and [their] education.” It was there that Chrystal would pursue her dream of going to college and, thankfully for us, find Break Through Tech through the City College of New York (CCNY).

Chrystal did not expect to become a tech student at CCNY, but the people she met along her educational journey helped her find her way. The summer before her senior year of high school, torn between becoming a pediatrician or a computer scientist, Chrystal pursued the Girls Who Code (GWC) Summer Immersion program. The program opened her eyes to the considerable gender gap in technology and the inherent challenges of coding. Rather than turn her away from the field, these challenges cemented Chrystal’s dedication to tech. She realized that she wanted an intensive college curriculum, something more challenging than her high school classes. With help from GWC and her female mentors from Twitter and Uber that she met through #BuiltByGirls, Crystal found her motivation to apply to college as a Computer Science major.

“I didn’t want to take the easy route. I wanted to study computer science because it challenges me, because every day I’d wake up and know that I [was] doing something that keeps me on my feet.. [T]here’s still so much to learn in this field.”

Break Through Tech further grounded Chrystal’s commitment to Computer Science. Her involvement began through the New York Summer Guild Program in 2017. During the program, she made new friends, developed her technical skills, and even created her own project called IT’S LIT NYC alongside engineers from Xandr (formerly AppNexus). “The Summer Guild program served as a monumental moment in my life that reminded me that I belong in tech.”

After Summer Guild, Chrystal stayed connected to the Break Through Tech community and her GWC roots. During her first year at CCNY, she interned at Verizon and Morgan Stanley through Break Through Tech’s Sprinternship Program and first realized her love of FinTech. During her sophomore year, she taught coding for GWC and added teaching to her growing list of interests. Each internship experience provided real-world projects that motivated her to pursue tech more. Now, Chrystal is “a queen of UX/UI” and thrives in the machine learning and frontend development sectors.

Chrystal describes that “it took a village, GWC, #BuiltByGirls, and Break Through Tech” to get her to where she is today. However, she makes it clear that she didn’t get there alone. From Rob Domanski, her first, and still favorite Computer Science professor to Judith Spitz, “her biggest cheerleader,” Chrystal’s experience is a testament to the importance of building a network you can rely on. When speaking of Judy, Chrystal emphasizes that she “believed in me” and “opened doors for me.” One of those doors involved introducing Chrystal to John Martin, her first manager at Verizon. Besides providing her first resume review, John also saw Chrystal’s potential and made sure to invite her to their Women in Tech Panels and other tech events, where she could continue to expand her network.

Where she will be in the immediate future is still uncertain, but her love for the fintech industry has her set on becoming Senior Vice President of Citi one day. Additionally, she knows the value of a good education and wants to help open doors for the younger generations in tech by becoming a teacher in the later future.

Chrystal knows that the gender gap in tech won’t close easily, but she believes that the efforts of programs such as Break Through Tech will create a pipeline for future women.

We’re excited to follow Chrystal on her journey in tech as she continues to champion the representation of diverse identities in the tech sector.