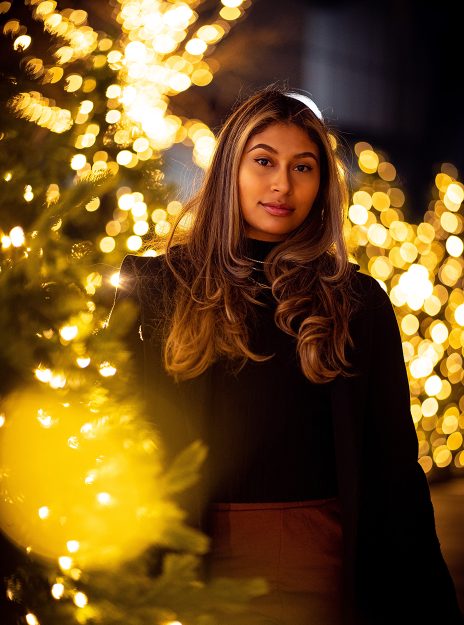 As part of the “Young Women Shaping the Future of Tech Series,” CUNY undergraduate at Queens College and Break Through Tech New York program alum, Cindy Navarro, shares her journey into tech.

During her childhood, she lived in the basement of her aunt’s home in Jackson Heights, Queens, while her migrant parents worked hours on end to support the family. As her family struggled to make ends meet, she and her sister spent a lot of time in her father’s car mechanic shop while her mother worked as a maid. After years of hard work, Cindy’s family moved to a new home in East Elmhurst. However, the hardships were far from over. Her father suffered a stroke that caused him to lose his business and brought on financial struggles that persist to this day.

Even while facing financial and emotional hurdles, Cindy’s father prioritized her and her sister’s education. Her father hoped to be able to give his daughters the education he had not been able to receive himself. Although Cindy excelled in her classes and was partial towards math, she did not have a favorite class due to an overall lack of interest. When not in school, she worked as a grocery cashier. Interacting with customers helped her to overcome her timidness.

Still questioning what career path to pursue, Cindy entered college as an undecided major. After reflecting on past summers spent surrounded by computer car parts at her father’s mechanic shop, Cindy realized that she wanted to learn more about computers and how they worked. Now, Cindy is a senior at CUNY Queens College pursuing a Bachelors in Computer Science with the goal of becoming a software engineer. “I want to earn that title of Software Engineer to confirm that all my academic struggles, the long sleepless nights and consecutive days of crying out of stress, were not done in vain.”

When Cindy saw that Break Through Tech was for women in tech in New York, she immediately thought, “That’s me!” Although programming was not exactly intuitive, she worked hard and learned to code. With the weight of her parent’s expectations, much of her career pursuits were driven by the pressure to succeed. However, Break Through Tech “morphed [her] career vision into something much more significant and impactful,” and she realized through the support of the Break Through Tech and CUNY communities that there were others with similar hardships who wanted to support her.

“I feel driven by a meaningful purpose to be a part of the collective change to dismantle gender disparages so that eventually I can provide support to others as the program has done to me.”

The program reminded her that there is always an entire community of like-minded individuals working towards similar goals and that rather than competing, we should be uplifting each other.

Despite her struggles, she has already made significant strides in her professional life, such as interning with Mastercard and expanding her professional network. One great new contact was Camille Gonzalez from Bloomberg, whom Cindy met during her 2020 Sprinternship®. As she was already a subscriber to Bloomberg News, stepping foot into a company building that is central to the media, tech, and business fields was an immense achievement itself.

As Cindy is interested in both tech and business, she expressed interest in Bloomberg to Camille, explaining how she could blend in her two main business and technology interests of business and technology. Connecting with Camille reminds Cindy that in situations where she regresses into fear, she has already made monumental strides and can push past her mental anxieties.

In addition to the women in tech who inspire her to break barriers, Cindy noted a particular customer she met three years ago who happened to be an engineer. “He was responsible for reigniting a passion I had not only forgotten about, but a passion that I was once too afraid to pursue because I simply didn’t know how or what, or where to start.” He was a pivotal person in shifting the trajectory of Cindy’s career and educational journey into tech; his education was everything she aspired towards.

“The pursuit of this career has given me a cascading vision of accomplishments I seek to work towards; for that I am grateful.”

In navigating through the choppy waters, Cindy gained words of advice and experience that she would like to share with others. First, she would like to tell younger students to not be shortsighted and to not be too hard on themselves; that paper you worry about right now will have no testament to your value or capabilities in three years. “The reality is that we are gradually making small progressions even through failure,” she says. Even as she attempts to figure out where she is in terms of professional growth, Cindy is rightfully proud of how far she has come already and gives 100% of her all each day.

Moving forward, Cindy is committed to fulfilling more of her professional goals after college, such as landing a full-time Software Engineering role at one of her ideal companies.

We are incredibly grateful for Cindy’s participation in Break Through Tech and her willingness to open up about her educational journey and we can’t wait to see where she will go as a woman of color in tech and future software engineer.