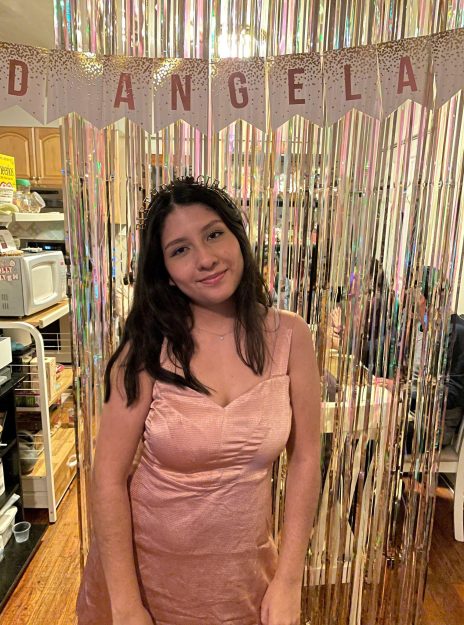 As part of the “Young Women Shaping the Future of Tech Series,” a CUNY City College of New York student and Break Through Tech New York program alum, Angela Diaz, shares her journey into tech.

Angela Diaz was born in Peru. After moving to New York early on in her childhood, she ventured on a creative journey by exploring the public library for craft books and creating art. Those moments would be mere stepping stones towards her Digital Design degree at CUNY City College of New York, where she is expected to graduate next year.

As Angela grew up alongside her older and younger brothers, she recognized the importance of community engagement and relationship-building. She formed bonds with her teachers, specifically a math teacher, during her latter two years of high school. Angela also kept busy outside of school. Her first job was at a country club, where she interacted with club members and learned the value of respecting others and being kind.

Angela knew she was passionate about creativity and design and even considered architecture as a field of study. However, it took a suggestion from her brother to set her on a path toward computer science and digital media. Curious to learn more, she was intrigued by an  email she received from Break Through Tech about the Summer Guild Program. Since the Summer Guild required no prior technical experience and offered a stipend, it was the perfect opportunity for her.

Participating in Break Through Tech’s Summer Guild was a pivotal moment for Angela, and as she says she “fell in love with what [she] did.” She didn’t feel the same passion for computer science in her Intro to CS course at City College, but her experiences at the Summer Guild reaffirmed her commitment and changed the way she saw tech. “I realized that I liked ideation, prototyping, UXUI, and just creating more than I liked the actual building.” Break Through Tech has also made her more confident in going for what she wants, especially as a Latina woman. Moving forward, she intends to align her interests in design towards the tech sector.

Upon reflecting on her experiences with Break Through Tech New York, she notes that the most memorable experience was the 2020 Sprinternship® with BestFit. Angela worked alongside the co-founders, Rebecca and Asha who introduced Angela to a plethora of impassioned individuals creating their own start-ups. Seeing people doing what they love unapologetically, further inspired Angela to chase her goals in the UXUI sector. “It was just so inspiring to see so many people going after their dreams. They all believed in their ideas so much that they had the confidence to pursue it,” she says. “I realized that what I loved to do was create.”

Throughout her educational journey and those meaningful interactions with her peers, she’s realized for herself that she can achieve what she sets her mind to. This lesson was emphasized after the first major lockdown during COVID-19 in March 2020. “When life froze and got turned upside down, I was just sitting in a puddle of doubt and uncertainty. Now a year later, I still have doubts and insecurities, but I can feel at peace with myself because I know I am creating a life that I want to live,” she says. She is especially proud of her decision to switch her major to Digital Design because she was taught that an art degree alone would not be enough to give her a successful future. But, by merging her interest in art and design with her knowledge of tech, she can achieve her goals.

Moving forward, Angela is committed to studying the intersection of technology and art. She would also like to explore more creative work such as music. Regardless of what she will become in the future, her mission is to use her creativity for good. “Our world is damaged in so many ways, and I just hope that I can be a part of the small change that hopefully catapults a better world for everyone.” In the future, Angela also hopes to give back to the community who supported her the same way by participating in educational outreach programs that teach computer science to girls.

Angela has a thriving digital design career ahead of her, and she wants others to know that they should trust their gut when it comes to life decisions. “Lean into that one thing you like. Learn more about it and work towards it,” she advises. Because although we tend to rationalize and want to make other people proud, what’s most important is doing what you want.

We’re excited to follow Angela on her digital design journey as she continues to champion the representation of diverse identities in the tech sector.