How to Get More Women Into Technology 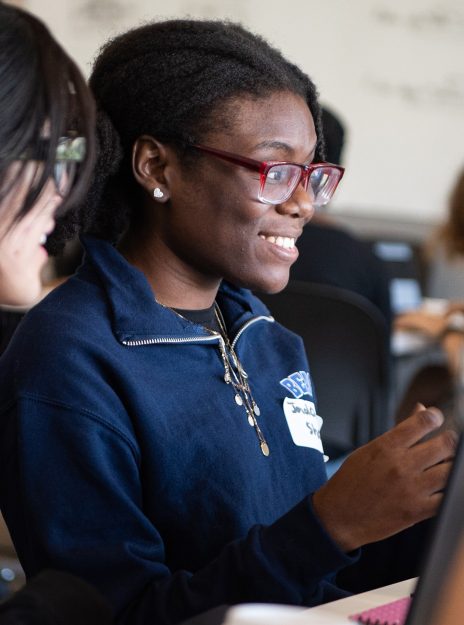 As published in the Wall Street Journal: Break Through Tech is one of a number of programs working to steer women into STEM fields.

This page republishes the Wall Street Journal article from June 2, 2021 in its entirety.

During her decadeslong career in technology, Judith Spitz watched as the “dismal number” of women in the industry failed to budge. In 2016, she decided to do something about it.

That year, Dr. Spitz founded Break Through Tech at Cornell Tech in New York City, an initiative aimed at increasing the number of women in computer science and tech careers. By using a mix of methods—including setting up internship arrangements that better suited the students’ strengths—the program saw strong results: Today, about 50% of its participants win summer internships, up from 5% at the start.

Break Through Tech is one of several recent efforts that are making headway against a longstanding problem: boosting the small number of women in science, technology, engineering and mathematics, or STEM. These programs attack the problem in a number of different ways. They are giving students enrichment programs, setting them up with female mentors as role models, grounding their course work in real-world problems to keep it relevant—and sometimes, like Break Through Tech, mediating with potential employers.

Beyond that, many of the programs are looking to change something even more fundamental—how girls are taught science and even how they view themselves.

“Our education system is simply not set up to close the gender gap in tech,” says Tarika Barrett, chief executive officer of the training and advocacy group Girls Who Code.

STEM fields are some of the fastest-growing and most lucrative, and increasing the number of women in their ranks would likely have big implications for the economy, the products these firms develop and, of course, the women themselves.

Despite some gains, though, progress for women has been slow in many areas. In computer science, it has reversed. The share of women awarded bachelor’s degrees in computer science declined to 19.9% in 2018 from 27% in 1998, according to the most recent data from the National Center for Science and Engineering Statistics within the National Science Foundation. 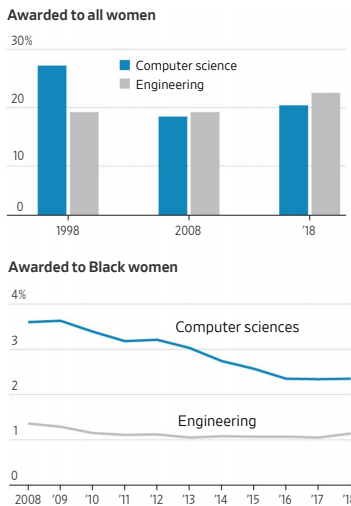 A Technical Problem
Gains for women have been slow in many areas, and in computer science they have reversed. The setbacks have been even more pronounced for Black women. Above are the percentage of bachelor’s degrees in engineering and computer science awarded to women.
Source: National Science Foundation

“We’ve got issues that go from right when a girl enters pre-K all the way into senior leadership roles in STEM fields,” says Kim Churches, chief executive officer of the American Association of University Women, a nonprofit advocating for women and girls’ equity.

Break Through Tech’s initial efforts to deal with the problem centered on women attending the City University of New York. The organization sought to increase the number of students who were hired for summer internships, which are key to landing a full-time job in the industry.

The employers seemed eager to participate, says Dr. Spitz, formerly Verizon’s chief information officer. Her organization “tried to act as a concierge facilitator” helping to introduce companies that had indicated an interest in hiring CUNY students to those students, studying just a subway ride away, looking for gigs.

“After two summers of doing that, we observed that a pathetically small number of students were actually landing those coveted tech summer internships,” Dr. Spitz says.

The problem, the organization realized based on conversations with the companies’ hiring managers, was that although the companies had said they were interested in recruiting more students from CUNY, the eligibility criteria for the internships didn’t match the students’ experience.

That is because students at CUNY are more likely to come from low-income households than those at institutions where technology companies have historically recruited. Instead of participating in weekend hackathons or other activities that résumé screeners were used to encountering, these students may have had to work.

The answer was short, paid internships, called Sprinternships that took place during an academic recess, usually students’ winter break. That allowed the companies to get to know the students without the level of commitment required for a summer internship.

Instead of going through the typical internship interview process, Break Through Tech collects data on the students, such as their course work, extracurricular activities and the sector they are interested in. It plugs this information into an algorithm that matches the students with companies based on what, if any, technical skills they are looking for.

More than 1,000 young women have participated in the program so far—and now, more than 50% go on to land summer internships after the shorter ones during other times of the year. Often the summer internships are at a different company from the Sprinternship. The program recently expanded to Chicago and Washington, D.C.

“You’ve got to find innovative ways with a low barrier to entry in order to have these companies change what they do,” Dr. Spitz says. “If you ask them to make big changes—they’re not going to do it.”

Other efforts try to address how girls are taught—and treated in the classroom.

During early elementary school, girls and boys are equally interested in science and math, but that starts to diverge some time in late elementary school, says Nilanjana Dasgupta, a professor at the University of Massachusetts Amherst who studies implicit bias. “The obstacles are not about ability,” she says. “It’s more about there are some things that are impeding girls’ interest and confidence that they’re good at it.”

There is evidence that the messaging girls receive from parents, guidance counselors, teachers and society more broadly may be part of what’s getting in the way of that interest. Nicole M. Joseph, an assistant professor at Vanderbilt University’s Peabody College of Education and Human Development, has found that teachers’ perceptions of Black girls, in particular, can be an obstacle to them developing a math identity—an interest in math as well as being recognized for being good at it.

Jakita O. Thomas is tackling those issues, trying to transform how computing is taught and push the field to value the experiences of people from a variety of backgrounds, so that it is more equitable for Black women and other historically marginalized groups.

In 2013, Dr. Thomas, Philpott Westpoint Stevens associate professor of computer science and software engineering at Auburn University, began working with a group of 23 Black girls during the summer before sixth grade as part of a free enrichment program focused on game design. Throughout the program, which continued through 12th grade, the girls spent weeks in the summer designing games to address social issues, like hunger and homelessness, and participated in technical workshops during the academic year. The girls also took field trips to learn about ways they could apply their computing knowledge to careers in various fields.

In addition, everyone who came in to teach an element of the program was a Black woman in the field. “Oftentimes, a lot of Black women don’t know another Black woman that’s in computing,” Dr. Thomas says. “Opening that up to them, the impact of that has been really amazing.”

Now the girls are young women and only one isn’t pursuing a STEM major in college. Dr. Thomas says part of the reason for the program’s success is its long time horizon.

“Think about most of the interventions that you know about, they’re like a half a day, a weekend, a week, it’s just not sustained enough to help young people, especially Black girls, to make the transition,” she says. Dr. Thomas is developing software that she hopes educators can use to implement a game design for social change program in other regions. The software is being piloted and she hopes to have it available for purchase in 2022.

Girls Who Code also tries to support female students with extracurricular activities. In addition to teaching coding and other computing skills, the organization’s summer immersion programs and 8,500 after-school clubs feature experiences designed to build leadership and foster community. These include “women in tech” spotlights profiling past or present leaders in the field and team projects using technology to address a problem important to the participants, such as building a website about climate change.

Alumnae of the program are majoring in computer science at 15 times the average rate for women in college, according to Girls Who Code. The organization continues to support its alumnae through college, an effort it ramped up during the pandemic as students started seeking more resources for finding and landing internships.

The transition into college can be an important period for ensuring young women stay on track toward a STEM career. Dr. Dasgupta’s research has found that women pursuing engineering in college were more likely to stick with the major beyond year one if they were assigned a female peer mentor than if they worked with a male peer mentor or no mentor at all.

“Having a female student who was a senior in your same major who you have lunch with once a month has a huge effect on students, not just while they have that mentor, but four years later when they’re graduating,” Dr. Dasgupta says

In addition, research indicates that changing the way introductory science courses are taught in college could help to better retain students from underrepresented backgrounds. Cara Gormally, an associate professor of biology in the School of Science, Technology, Accessibility, Mathematics, and Public Health at Gallaudet University, is developing a curriculum for introduction to biology based on these insights.

Often, introductory biology courses are structured as a “march through content with no connection of why you should care about it,” she says. Instead, Dr. Gormally’s course, which she’s developing with a colleague at the University of Georgia, will look at topics like how antidepressants work, how to make sustainable food choices and whether you should participate in genetic testing.

“Our goal was to think about how we could actually use really current issues and study biology through those issues,” she says.

The course also aims to connect the content with work scientists are doing today. The field has become more diverse than in the past, but if students don’t know that, it’s hard for them to “see that science contains a possible future for yourself,” she says.

“That whole stereotype of this crazy dude working alone in this chemistry lab is so persistent,” Dr. Gormally says. “This does have an impact on people’s decisions” about their careers, she adds.

It is too early to say whether the course is effective at increasing retention in STEM. But other research indicates that engaging students through socially relevant scientific issues can challenge stereotypes about science, which disproportionately affect women and students of color.

“It would be super exciting to assess and measure if it does make a difference, but also challenging because we’re changing so much,” she says.

Ultimately, to increase the share of women working and staying in high-paying technology, science and engineering fields, employers will also have to make changes. Ample evidence indicates that at worst hostile and at best nonsupportive work environments are preventing women from continuing in these sectors.

As part of Girls Who Code’s work, Dr. Barrett says its leaders are having conversations with their corporate partners about these issues., “holding them accountable, asking them to hire our young women.”

“We’ve managed to build this amazing pipeline,” Dr. Barrett says. “We have so many girls and women who are interested, we see a lot of young women enter the field and leave it.”

Ms. Berman is a reporter for MarketWatch. She can be reached at jberman@marketwatch.com

This article is published on the World Street Journal. Subscription required.