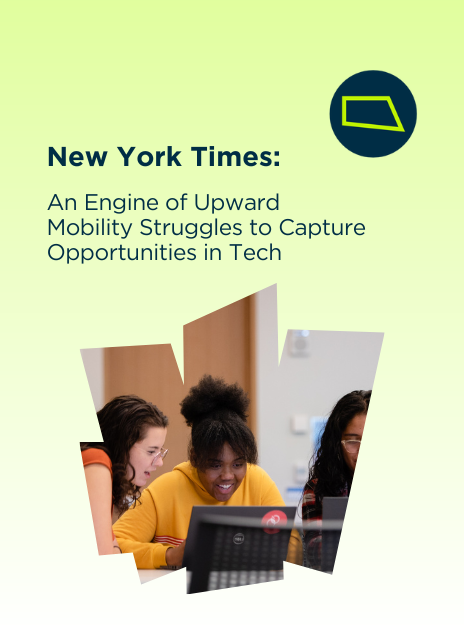 Students at the City University of New York are increasingly graduating with degrees in technology. A new report details the obstacles they face in landing jobs.

The technology industry has been a leading engine of growth for good-paying jobs in New York City over the past decade. That trend continued through the pandemic, but a new report casts doubt on how widely the tech-fueled prosperity is being shared.

The new study details the challenges that students at the City University of New York face as they try to start careers in technology. The CUNY system, with 25 colleges, is the nation’s largest urban university, and it has long served as a ladder to the middle class for low-income New Yorkers. A majority of its students are Black and Hispanic.

CUNY has the potential to be “the city’s largest and most equitable springboard into technology careers,” the report said, but that potential is largely untapped.

Both CUNY and tech employers must change to address the challenge, according to the Center for an Urban Future, the public policy organization that conducted the research.

Hampered by budget constraints, CUNY has traditionally invested little in career development. The handful of successful but small programs offered by the system to connect students to internship, apprenticeship and hiring opportunities need to be sharply expanded, the report said. And courses have to be revamped to teach the skills and use the technical tools in demand in today’s digital businesses.

Employers must also “overhaul recruiting and hiring practices that too often overlook the city’s homegrown talent pool, and work closely with CUNY,” the report said.

Since 2011, CUNY has more than doubled the number of students who earn degrees in technology, to nearly 4,000 a year. But the increasing supply has not been matched by success in the job market.

Half of CUNY computer science graduates do not have a job in their field a year after graduation, according to the report. Paid internships — a vital recruiting channel in technology — are also scarce: Just 10 percent of CUNY students report having one during their college careers.

“Technology is where the good jobs are growing in New York, and too few of them have gone to people of color,” Jonathan Bowles, executive director of the Center for an Urban Future, said.

Amazon provided financial support for the study but had no editorial control, Mr. Bowles said.

The tech sector is not immune from the current economic slowdown, as companies pull back on hiring and trim payrolls. Still, jobs in technology are expected to be a prime source of employment growth in the long term.

By the end of 2021, the city’s tech sector employed 194,000 people, the center’s analysis found. But that number understates the overall employment for technology workers in the city because it excludes software engineers, data analysts and cybersecurity experts in other industries like finance, health care, media, advertising and consulting.

In New York, middle-class jobs are typically defined as those that pay $80,000 or more. The average salary for workers in the city’s tech sector was more than $220,000 last year, the research center estimated.

Making tech employment more inclusive is a goal nationwide. New York, America’s largest city and home to a diverse population, would seem a place where progress could be made. Today, fewer than 21 percent of tech workers are Black or Hispanic, even though people belonging to those two groups are 43 percent of the city’s work force.

“New York is uniquely positioned to be not only a leader in tech but also a leader in tech diversity,” said Jason M. Clark, executive director of Tech:NYC, a nonprofit industry group. “But we need to develop pipelines to jobs.”

The biggest potential pipeline, according to the report from the Center for an Urban Future, is the CUNY system.

In interviews, CUNY students who landed jobs in technology said they typically did so through individual initiative, happenstance or a program that gave them work experience.

For Faisal Farooq, the big break came after he answered a TaskRabbit ad that had been posted by a venture-backed start-up looking for someone to do basic data analysis. Mr. Farooq, an electrical engineering major at City College, had none of the coding skills required, but he quickly picked them up.

The work environment was fast-paced and welcoming. He was making about $4,000 a month. “And when the summer ended, nobody asked me to leave,” he recalled.

So he stayed on. The start-up later closed, and Mr. Farooq went back to school to finish his undergraduate degree.

But he was on his way. He had work experience, and his competence with modern programming tools was growing. One job led to another, and today Mr. Farooq, 30, is a senior solutions architect at Amazon Web Services, the company’s cloud computing business.

“If I hadn’t had that first opportunity, I would not know about the world of possibilities in tech,” Mr. Farooq said.

Chrystal Mingo decided on computer science as a college major after attending two brief summer programs run by nonprofits, Girls Who Code and Break Through Tech, a year later.

She was 17 and had just graduated from high school when she took a paid, two-week immersion course at Break Through Tech, which focuses on offering training and support to young women from underserved communities. The instructors were inspiring, and the focus was on real-world projects rather than academic drills. Her group designed an app showing well-lit streets to increase walking safety in Bronx neighborhoods at night.

That led to two three-week, paid internships at companies. The brief internships, which are called “sprinternships,” are typically during winter breaks from school but often lead to full summer internships and then to job offers, as they did for Ms. Mingo.

“Our students needed an opportunity to get their foot in the door and to earn a résumé credential,” said Judith Spitz, a former chief information officer of Verizon and the founder of Break Through Tech, who devised the short internship concept.

Ms. Mingo, 23, graduated from City College and is now a business technology analyst at Citigroup. She credited Break Through Tech with being her springboard. “All these doors opened up for me, and it was kind of a domino effect,” she said.

Plinio Ayala, the chief executive of Per Scholas, a nonprofit that runs a job-training and work-placement program, said his organization catered to a steady stream of CUNY graduates. The participants receive tuition-free training in business-focused technology for a few months as well as links to employment opportunities. Eighty percent have technology jobs within a year of completing the program.

“The network doesn’t exist for a lot of CUNY graduates,” Mr. Ayala said. “We’re the connector and validator.”

Félix V. Matos Rodríguez, the chancellor of CUNY, said the system must increasingly forge student-to-career connections. Since he took on the role in 2019, Mr. Matos Rodríguez has pushed for greater industry engagement and internship opportunities for students.

There has been progress. As part of a program that was announced last year, Bloomberg, Centerbridge and Goldman Sachs now offer paid internships and career advice in the tech-heavy finance business to CUNY students.

Mastercard is working with LaGuardia Community College to shape its cybersecurity courses and hire students for full-time jobs after they complete an apprenticeship with the company.

Google has also stepped up its recruiting efforts at CUNY schools, hiring 30 graduates for full-time jobs and taking on 21 CUNY students as paid interns and apprentices in the most recent academic year.

Mr. Matos Rodríguez said the Center for an Urban Future study pointed to the need for “more innovation, partnerships and opportunity for our students in technology.”

That will require more resources, but also a different approach to career counseling and a closer relationship with business, CUNY leaders say.

City College has five full-time career advisers for its 14,000 students. Vincent Boudreau, the president, wants to increase that group to 12, but he would also like to bring industry experts, including midcareer professionals in technology, into classrooms across the college. The city recently announced an inclusive economic program that would support his plans.

“We’ve got to start building career development and pathways as part of the curriculum,” Mr. Boudreau said.

Work-and-learn experiences are crucial. CUNY students in one internship program were three times as likely to be hired for technology jobs as their peers.

Kenneth Adams, the president of LaGuardia Community College, said CUNY needed to persuade more employers to offer internships and apprenticeships for its students. “It will take time and effort, but if we can get the connections right, we can lift people out of poverty into great careers in technology,” he said.

Steve Lohr covers technology, economics and work force issues. He was part of the team awarded the Pulitzer Prize for explanatory reporting in 2013. @SteveLohr

A version of this article appears in print on Nov. 8, 2022, Section B, Page 1 of the New York edition with the headline: CUNY Isn’t Meeting Potential as Springboard to Tech, Study Finds.