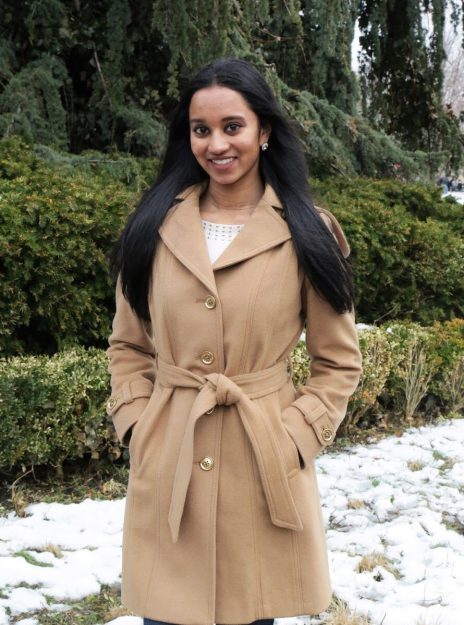 As part of the “Young Women Shaping the Future of Tech Series,” CUNY undergraduate at Hunter College and Break Through Tech New York program alum, Nalini Ramdeo, shares her journey into tech.

When the lease ended at her father’s deli in Manhattan, the family struggled with a series of hardships, but—with support from her two loving parents and two younger sisters—Nalini committed herself to advancing her education. When she realized at a young age that math was her best subject, she developed those skills even further and eventually landed a tutoring role at Kumon during high school. Hoping for a greater challenge, she pursued an internship with Girls Who Code, which helped her realize that she wanted a future career in tech. Now, a junior at Hunter College, Nalini is preparing for what awaits her as a future woman of color in the tech sector.

When Nalini was accepted into the CUNY system, she received an email that mentioned a computer science opportunity for women through Break Through Tech (formerly WiTNY). She immediately knew that this was her calling and decided to jump feet first into the opportunity.  She took advantage of almost every single opening, including the Summer Guild, Sprinternship® Program, Career Prep Workshops, the Career Readiness Program, and the Ambassador Program and “wouldn’t trade [Break Through Tech] for the world.” Though she is still deciding what specifically she wants to do in the tech sector, she now “understands that [coding] is just one component of a bigger sphere” and that there are a variety of paths to be taken.

When asked about a specific memorable moment or experience, she recalls her 2020 Sprinternship® at Paul Weiss. In a span of two weeks, it became one of her most uplifting internship experiences. During the internship, she was inspired by Marianne Mooney, the IS Administration Coordinator and Marianne Tepe, the IT executive. She also met one of her now-closest friends, Julianna from Hunter College during her time with Paul Weiss. “Through Break Through Tech’s network we were able to connect and form a friendship that proves very fruitful as we are able to bounce ideas off one another and even work together on certain projects.”

As far as accomplishments go, Nalina shares that she is extremely proud to be “one of the few West Indian females to have had multiple internships every year so far throughout my college career.” She attributes Break Through Tech as being one of the reasons why. “I am so thankful to Break Through Tech for opening so many doors of opportunity for me since the beginning of my freshman year. Just thinking back that I have worked with such great corporations like Cornell Tech, Hospital of Special Surgery, Paul Weiss, and Upperline Code makes me feel like I can survive and thrive in any sort of company I am placed in. I will never forget the experience and memories I have created while there.” While she mentions that her mom is still her #1 inspiration, Nalini credits all the women pursuing and thriving in a male-dominated field — that their hard work and determination is what inspires Nalini to push forward and never give up.

“Being with Break Through Tech has taught me how to communicate and express myself without judgment. I have learned what it’s like to work at big firms and interact with those who are in higher positions than me and still be able to convey my thoughts and ideas efficiently and effectively.”

“Being a part of this program has opened my eyes to a whole new world that I had never really been exposed to. I can now confidently say that I am ready to enter the workforce without any fear or doubt.”

One of the greatest pieces of advice that Nalini has to offer is to make connections and build networks because, although it may seem intimidating at first, it will open up new career paths, mentors, and experiences. She says that there may be times where you are stuck in a particular spot, but forming bonds with those who have the same or more experience than you will encourage you to explore outside your comfort zone.

With multiple internships under her belt, Nalini is poised for a successful future and ready to take advantage of the many opportunities available to her. One day, Nalini would like to work with data and perhaps social media, as she has always been interested in analyzing information and data reading. In the meantime, she is continuing to work on her coding skills and improve her technical skills so that she’s prepared for her next steps. A possible future chapter—exploring the business side of tech.

We’re excited to see where Nalini will go and can’t wait to follow her journey as she gets there.