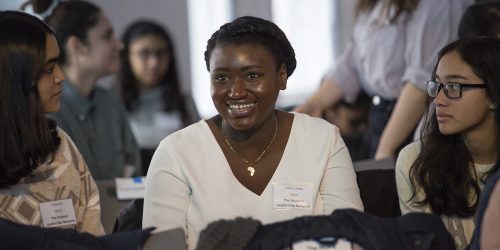 Break Through Tech is an initiative of Cornell Tech launched in 2016 as Women in Technology and Entrepreneurship in New York (WiTNY). With support from a number of corporations, including Verizon and Accenture as our founding sponsors, a partnership was formed with the City University of New York (CUNY) with a goal to increase the number of women graduating with degrees in computer science and related tech disciplines, and serve as a role model for cities around the nation.

Building on successful approaches championed at several private colleges and universities, WiTNY focused on curriculum innovation, career opportunities, and community building for women in tech but with an eye toward the particular needs of Black and Latina, low-income, and first-generation students that attend large public universities like CUNY.

From 2016–2019, CUNY made great progress toward the goal of doubling the number of women majoring in computer science.

Based on program outcomes from Break Through Tech New York and likely impacted by a number of programs.

50%
Of the students who participated in Sprinternships™ and were seeking a tech internship, 50% landed one that summer.

Based on program outcomes from Break Through Tech New York.

In January 2020, WiTNY became Break Through Tech with support from Pivotal Ventures, the Cognizant Foundation, and Verizon. Our plan is to replicate our programming model in other cities around the country.

The first expansion city was Chicago in January 2020. We partnered with the University of Illinois at Chicago (UIC) and GET Cities to bring our programs to students. In 2021 we expanded to the DC Metro area, our first cross-institutional collaboration with the University of Maryland, College Park (UMD) and George Mason University (GMU). In 2022 we will expand to Miami in partnership with Florida International University (FIU).

Our plan is to continue to expand the number of universities and cities where we partner to offer our programs. We take a local ecosystem approach in order to drive change at a national level.